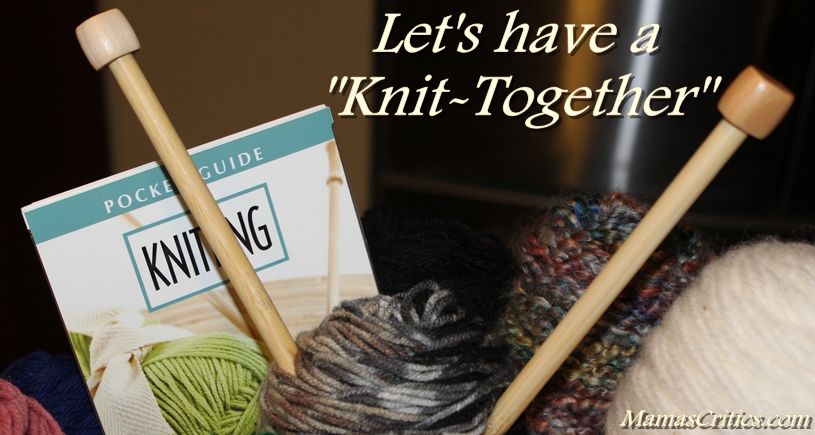 How My Knit Together Came to Be

I have wanted to learn how to knit since I was a young girl. My grandma had a whole wall of shelves that were filled with skeins of yarn. This was a treasure trove for me. It was beautiful. Grandma could knit, I saw her knitting needles, but knitting wasn’t her thing, she liked to crochet. I didn’t really know anyone who knew how to knit and was willing to teach me.

I remember sitting with her and helping her roll one skein after the other into balls that made it easier for her to use and imagining what I could make with all of that yarn. Grandma could crochet beautiful afghans, doilies, shawls, and even doll clothes. She taught me how to crochet a simple chain stitch and then another. If I worked a long time, I was skilled enough to make a doll blanket or a scarf.

As an adult, I still wanted to learn to knit, but life has always gotten in the way. I was sitting in the nursery of our homeschool co-op where one of the other adults was knitting. She was sitting in a glider and had a small knitting bag on the floor beside her with a string of bright pink yarn coming out and meeting her knitting needles as she stitched away. She said she was making something for her daughter.  I started asking her questions about the craft. She was so willing to answer them. Each week we talked more and more. She told me there were a lot of women in the co-op who were asking about learning to knit. I suggested we have a knitting party, and so the “Knit-Together” was born.

An Invitation to My Knit Together

This is a get-together for people, adults and kids alike, who want to learn to knit. I asked several other women if they were willing to teach if I was willing to host. They said “yes.”  I sent an email out to anyone and everyone I thought might want to learn how to knit. It went something like this:

Ages 12 and up are welcome.  If you don’t have your own, I will provide some yarn and knitting needles for you to use. I will also have yummy treats and drinks to share.

Please RSVP by Friday. Simply hit “reply to sender” or email me, label it “knitting party” and let me know if you will be a student or a teacher or both.  Hope to see you here!

The response was overwhelming! We had about 20 people show up and requests for us to have more in the future.

As promised, I supplied yarn and knitting needles and simple snacks. I bought a few different sizes of needles and dug onto my stash of yarn to give those who had none something to use. I was surprised at how many didn’t need what I provided. They had their own, like me, in hopes of someday learning how to knit.

Food for My Knit Together

For snacks, I decided on non-greasy finger foods, so our knitting projects could stay clean.  We had a cheese tray (with toothpicks). My daughter made sweet little signs to tell everyone what kind of cheese they were eating. We also had a fruit tray with fresh pineapple, strawberries, and grapes. plus a vegetable tray, lemonade, and iced tea. 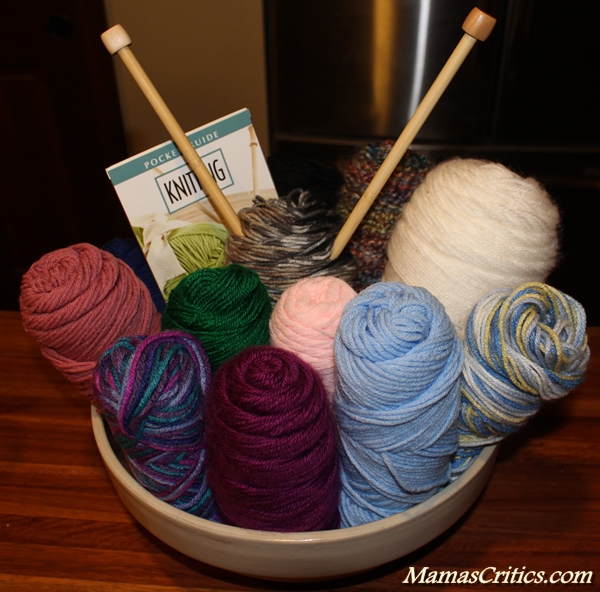 I made this fun centerpiece for my table with yarn a handy knitting pocket guide, both used later during the party.

The ladies all sat in a circle in my family room (on chairs, on the hearth, on the floor). We had a small introduction telling who was there to teach and who was there to learn. We went around the room and told our names, how they knew me, and what they knew about knitting. Then we paired up into groups of two or three. Each group included at least one person who could knit and teach others the basics. We rotated the groups now and then to learn the different knitting techniques and styles and so some of the intermediate teachers could learn from the advanced knitters. We had several kids join in on the fun. I hope they will remember learning to knit and keep learning.

We had a lot of fun and plan to have more in the future. We decided to have a separate one for kids to give them more one-on-one attention.

What do you think? Would you have a “Knit Together”?