You are here: Home / Food / All Recipes / Mama’s Ham Gravy on Biscuits
2 Comments 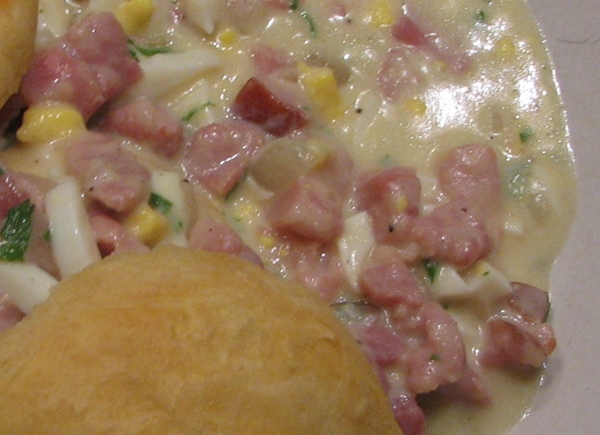 Who would have thought such an easy inexpensive recipe would be such a big hit with my family.  I came across this recipe in a magazine, so I tweaked it, as usual, and gave it a try.  Now my family requests it all the time.

One day I started making this dish and discovered someone had eaten the last of the eggs, so I used potatoes instead.  My family couldn’t decide which version they like better, so I have included both options below.

Ingredients for Ham Gravy on Biscuits:

6 hard-cooked eggs, chopped (I use my handy egg slicer and slice the egg one way then turn the egg and slice it the other way)

Instructions for Ham Gravy on Biscuits:

Bake biscuits according to package directions.

In a large skillet

, saute ham and onion  in butter for 3-4 minutes or until onions are crisp-tender.

Stir in bouillon cubes, Worcestershire sauce and pepper. In a small mixing bowl, combine the flour and milk until smooth; gradually stir into the pan.  Bring to a boil; cook and stir for 2 minutes or until thickened.  Gently stir in the eggs and parsley.

Split biscuits in half horizontally, place on dinner plate, and top with ham mixture.

Another Option for Ham Gravy on Biscuits:

For the second option, I chopped 8 medium potatoes in small cubes and boil them until they are tender (about 20 minutes).  When the recipe says to add the eggs and parsley, add the potatoes and parsley.

I think next time, I will try both, the eggs and the potatoes, in the same dish. 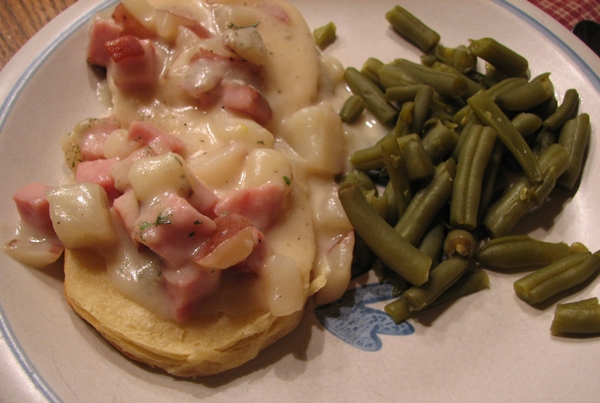