You are here: Home / ...for Families / The National Museum of the United States Air Force
1 Comment 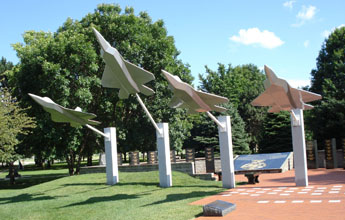 This is a fascinating place to take the kids on a Day Trip (maybe even 2 days).  Take a step back in time and journey through years of military aviation history.

The museum is divided into galleries, that cover many time periods in military aviation.  The  galleries are broken down into small exhibits that detail specific time periods that depict aircraft in their historical setting.

Starting with ‘Early Years Gallery’ going through to the ‘Missile and Space Gallery”.

Early Years Gallery- This gallery takes you from the earliest days of military aircraft to the early 1940’s.

Air Power Gallery- Takes it from there and tell the Army Air Force’s  story of World War II.

Cold War Gallery- This gallery is located in a 200,000 square foot hangar and tells us about the Air Force’s roll in defeating Soviet Communism and waging the war on terrorism.

Research and Development/ Flight Test Gallery- Connected to the Presidential Gallery, this gallery shows many impressive experimental aircraft and the interesting stories behind them.

Memorial Park- This Park is located outside at the south side of the museum.  It has over 500 dedications  honoring people associated with the Air Force for their past service and the sacrifices they made for our country.

IMAX Theatre- The IMAX Theatre is certainly my kid’s favorite part of the museum.  6 stories high, 500 seats, a screen that partially surrounds you, and an awesome sound system all add up to an awe-inspiring show.  This is a cool experience for kids.  It makes you feel like you are on an adventure, and involved in the scene.  Shows start on the hour each day.

Morphis MovieRide-This is another of my kid’s favorites in the museum.  This is a flight simulator that makes you feel like you are flying in a fighter jet.

Stop by the museum’s Souvenir Shop/ Bookstore. Here, they sell Air Force and Military-related merchandise, such as books, toys, clothing, videos, and even ‘astronaut food’.

My kids have a collection of ‘smashed pennies’ from a lot of the places they have been, the museum has a machine in the Souvenir Shop/ Bookstore that imprints pennies with 4 different aircraft through history.

The museum is open 9 a.m. to 5 p.m. seven days a week.  It is closed on Thanksgiving, Christmas, and New Year’s Day.

Admission to the museum is FREE! You can’t beat that! There is a charge for the IMAX Theatre and the Morphis MovieRide, but they are worth the price.

If you are interested in more Ohio travels check out this book: