Here in Ohio, we don’t usually get snow that lasts very long.  We will get a storm then a few days later the snow has melted away.  Well, this year we have had a lot of snow, plus extra cold temperatures.

About the end of December, my 5 older children took on a challenge to make a snowman taller than 10 feet.  They met the challenge.  Their snowman measured 10′ 3″ tall.  This guy was massive! 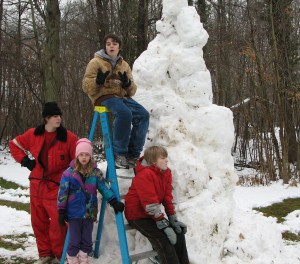 The way they used to put him together was not the usual method.  This made him a bit lumpy.  They rolled 4 snowballs as large as they could, then packed them together with snow, until it was huge.  After that, they stacked another 3-4 large snowballs on top of the first lumpy mass, then added snow to it, packing it tightly.  Finally, they had to use a ladder and slowly pack snow together to form the head.

With rocks for eyes, mouth, and nose and 2 forked branches for arms, they had truly created a “Frankensnow”.

Now, it is mid-March and “Frankensnow” has stuck around for quite a while.  With each melt-down making him a little smaller, he is now but a tiny pile of snow covered with leaves and debris, with 2 forked branches laying by his side. 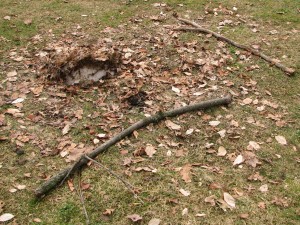 Good-bye “Frankensnow”, so long for now.  He must have gone back to the North Pole for the year.

‘Twas the first day of the springtime,

And the snowman stood alone

As the winter snows were melting,

And the pine trees seem to groan,

“Ah, you poor smiling snowman, ” What a pity,

Yes, I’d like to see July, and please don’t ask me why.

And the greatest ice must crumble

When its’ flowers time to grow.

And as one thing is beginning

So another thing must die,

And there’s never been a snowman

Who has ever seen July.

No, they never see July, no matter how they try.

But the snowman sniffed his carrot nose

And he bravely smiled his frosty smile

And blinked his coal-black eye.

And there he stood and faced the sun

A blazin’ from the sky–

And I really cannot tell you

If he ever saw July.

Did he ever see July?  You can guess as well as I